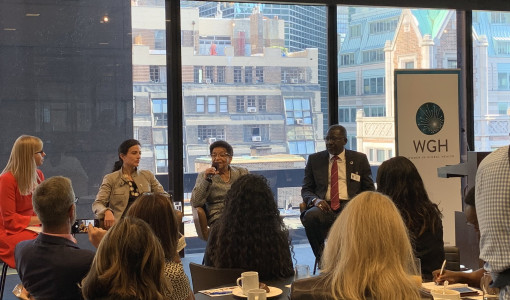 * During a panel discussion, Universal Healthcare and the Power of People: The Case for Investing in a Qualified Health Workforce, hosted by Devex, Seed Global Health, and Takeda Pharmaceuticals

Our Three Takeaways from UNGA 2019

Panorama staff attended the United Nations General Assembly (UNGA) last month, and two of us were there for the first time. We each had project-related events to organize in New York, but took advantage of the opportunity to attend side events during our free time.

Our thoughts and reflections on our experience during the global gathering are summarized in this blog. Most notably, we both felt the immense energy throughout the city, and there was a feeling of solidarity among the attendees, all of whom passionately want to effect change on a range of issues impacting people around the globe. Other than the motorcades and more-than-usual traffic jams, there was something very unique about connecting one-on-one with other participants during UNGA events and sharing moments of excited conversation with others, who were hopeful for the future, eager to share their experiences, and learn from others.

There is widespread agreement that achieving better humanitarian and economic outcomes for all people, universal healthcare needs to be prioritized, particularly in the global south. The panels and discussions we attended emphasized the need to focus on women and girls in order to more effectively impart change on the rest of the population. We also heard agreement that universal healthcare is more than just healthcare, and encompasses the social, economic, and physical determinants of health. That means we need to change all systems, not just improve existing health systems, and requires critically evaluating and restructuring institutions that impact financial and social wellbeing.

But change requires fiscal and political commitment. Investment in universal healthcare by governments is essential when we consider the ethical and economic implications of neglecting the health of some. As raised by Dr. Vanessa Kerry, co-founder and CEO of Seed Global Health, state leaders and constituents should be asking the question: “What is the cost of not [investing in healthcare]?”*

Climate and health are inextricable

The climate crisis was front and center during this year’s General Assembly. There were a myriad of climate-focused activities outside of the typical panel structure – there were walks in Central Park, composting demonstrations, and conscientious meals focused on sustainability and food sources.

In our Seattle bubble, climate as an urgent issue is not groundbreaking. In Seattle, the connection between environment and health are well understood. But from our vantage point, and based on colleagues’ past experiences at General Assembly, it seemed to be the first time the United Nations was on board, putting front and center the inextricable link between the health of our planet and its human populations.

We all need a reminder that the climate crisis is a problem for everyone, especially for those from low-income communities and communities of color in both global hemispheres. We also know that climate change affects the health and livelihood of those in the Global South more dramatically, and it is important that the United Nations is centering these communities.

Also during UNGA was the launch of the Clean Air Fund, a new $50 million initiative to address pollution worldwide. The fund supports organizations working to tackle air pollution, which causes 4.2 million deaths worldwide. Two years ago, we released Conversations on Planetary Health, in which we argue the important role philanthropists can play in mitigating the effects of climate change. We’re glad to see funders and government agencies coming to the table to discuss this important issue, and look forward to more stakeholders following suit to take action.

A young girl can galvanize a globe

Along with the rest of the world, we of course took note of Greta Thunberg, the 16-year-old Swedish activist lauded as the highlight of the General Assembly. Again, for many of us, the dangers of climate change are not new. Native communities have been warning of industrialized society’s impact on the earth for generations.

Regardless, hearing and seeing a 16-year-old girl stand in front of world leaders and demand they take this seriously – for her future, for all of our futures – was moving, inspiring, and catalytic. What’s more, Greta Thunberg does not want to be celebrated as a hero, she wants to see leaders take action. Her speech should push everyone present at UNGA last month to stop only speaking theoretically, but come together to determine a pathway forward.

In addition to seeing pieces of the larger General Assembly activity, each of us organized events for our respective projects.

Sarah organized and managed a high-level meeting of business leaders, former and current heads of state, philanthropists, and government officials to discuss global efforts around malaria eradication. The discussion centered on existing and innovative financing solutions to address the existing resource gap of approximately USD $2.3 billion. The meeting fostered collaboration among multilateral stakeholders and influential leaders that will accelerate progress toward the control and elimination of malaria within a generation.

At the other end of town, Naomi and Panorama’s CEO Gabrielle Fitzgerald led a strategy session with partners to coordinate our efforts to accelerate the pace of change toward gender equality in U.S. politics. We had a robust conversation that promises to lead to meaningful progress toward equalizing the gender disparity in elected office.

As with most gatherings full of change-makers, we left full of ideas, wondering what we can each do individually and as a community to take action toward meaningful positive change in our world.

What gave us hope was hearing small steps toward solutions to some of these immensely complex global issues. The speeches and discussions, in which a deeper understanding of the issue at hand was illustrated, especially those that shared diverse perspectives, were most meaningful and inspiring.

We left UNGA feeling more connected to our peers across the globe who - like us - are impatient for change and eager to continue to work together on the issues we care about most.

*During a panel discussion, Universal Healthcare and the Power of People: The Case for Investing in a Qualified Health Workforce, hosted by Devex, Seed Global Health, and Takeda Pharmaceuticals