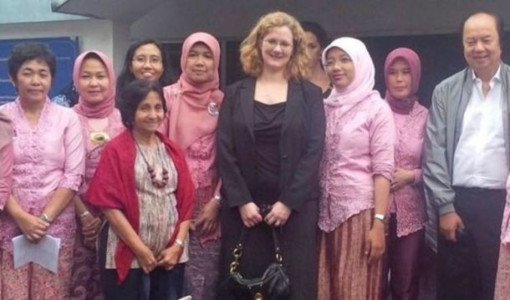 With 250 citizens stretched over 3,000 miles and 6,000 islands, Indonesia is the fourth most populous country in the world. With a country this large, Indonesia’s leaders made a decision in the 1970s to prioritize family planning. In the public health arena, they are now known for their incredible success over the past few decades in supporting family planning programs and reducing the fertility rate from 5.2 in 1973 to 2.6 in 2012.

A key part of the government’s plan to improve health care is to strengthen midwives to provide family planning services.

However, the contraceptive use rate has stalled over the last decade, and as many as 11 percent of married women have an unmet need for family planning.

On January 1, Indonesia introduced a universal health insurance plan for all citizens, which will be phased in over the next five years. A key part of the government’s plan to improve health care is to strengthen midwives to provide family planning services.

Last week I was in Bandung, Indonesia and had the opportunity to meet nurse midwives at the Puskesmas Puter, a local health clinic serving one of Bandung’s poorer neighborhoods. The clinic sees about 10 family planning patients a day. Long acting, reversible methods are the most popular contraceptives provided at the clinic. The staff noted the challenges women face in accessing contraceptives, particularly the obstacles of educating women on contraceptives and ensuring husbands sign a permission form for their wives.

I was in Bandung with Tahir, a prominent Indonesian businessman. The Bill & Melinda Gates Foundation and the Tahir Foundation are joining together with matched funding to help support Indonesia’s family planning goals in concert with the Indonesia Ministry of Health.

It will be exciting to watch Indonesia’s progress toward universal health care, and to learn about the progress made in family planning with midwives in this important role.