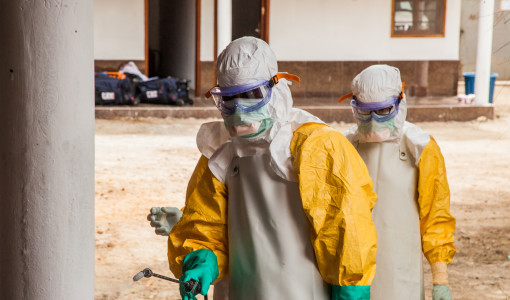 Lessons from an Outbreak: What the World Could Have Learned from the Ebola Outbreak in the DRC

In April, the world was preparing to celebrate the end of the second deadliest Ebola outbreak in history, which had been ongoing in the northeastern region of the Democratic Republic of Congo (DRC) since August 2018. The formal end of the outbreak was expected April 12: Two incubation periods—or 42 days—since the last Ebola patient was released from treatment. In a world where the COVID-19 pandemic is dominating all aspects of life, the idea of declaring this outbreak over was a small piece of good news.

However, celebrations were put on hold after the World Health Organization (WHO) confirmed a new case of Ebola. Since then, seven patients were diagnosed. Four died. To date, this outbreak has killed 2,279 people, and sickened almost 3,500. While it is unfortunate the outbreak is not yet over, it was the investments in response capabilities that allowed the new cases to be identified.

Today, every country in the world is faced with COVID-19. Although Ebola and COVID-19 are very different viruses, there are some basic principles of outbreak preparedness and response that apply to both. It is time we stop reinventing outbreak response each time a virus strikes and accept that there are investments in best practices that can be used time and again.

Investments in readiness capacities will pay off. The outbreak in the DRC is near borders with multiple countries, including South Sudan. While monitoring for Ebola, public health officials there were alerted to a yellow fever outbreak that, without these surveillance measures, could have gone unnoticed for weeks. Other countries in the region also repurposed efforts to monitor for Ebola to detect and respond to other diseases, including COVID-19.

Readiness for outbreaks—like surveillance, laboratory capacity, and stockpiles of critical supplies—allow public health authorities to rapidly identify a virus, engage communities, and control an outbreak. Investments across these areas will have a major impact on reducing disease transmission, protecting healthcare workers, and controlling outbreaks.

Poor coordination across all partners and levels can sink even the best outbreak response plans. During this Ebola outbreak response, it was crucial for international, national, regional, and local partners to unify, gain the trust of the local population, and mobilize community action. Without it, community ownership, safe conditions for Ebola responders, safe and dignified burials, and wide-scale vaccination efforts would have been significantly harder, if not impossible. Coordination was also key to diagnosing the recently detected Ebola cases in DRC and creating opportunities to break transmission. This level of engagement should not fall by the wayside once an outbreak ends. All partners should continue to prioritize preparedness, and ensure systems remain in place to enable coordination at the start of an outbreak

Rumors can create “infodemics” that are just as dangerous as the virus. The Ebola outbreak was fueled by rumors and public mistrust of foreign outbreak response teams. Misinformation about how the virus is contracted, medications, vaccines, and safe and dignified burials circulated throughout communities. There was also a widely held belief that healthcare workers and aid agencies who came from outside the region were there to make money off the virus and outbreak, not to end it.

By disseminating accurate information through trusted community channels and building relationships with local leaders, Ebola response organizations were able to reduce violence and dispel rumors to encourage Ebola preventative measures and treatments. Communications about all outbreaks should rely on trusted voices, and be factual and evidence-based.

Other diseases do not step aside for outbreaks or pandemics. During the Ebola outbreak in northeastern DRC, a deadly measles outbreak began in another region. Despite calls by leaders across sectors for the measles outbreak to not be overshadowed by Ebola, resource mobilization efforts and effective vaccination campaigns for measles continue to struggle in the DRC.

COVID-19 is diverting resources and stretching health system capacities, raising concerns about other diseases—such as measles, malaria, and TB–being overlooked. Rather than only looking at mechanisms to support a novel and high-profile infectious disease threat, preparedness planning should take in to account how to ensure minimal disruption of the broader health system during an outbreak.

Economic impact can outlast the epidemiological impact. The 2014-16 West Africa Ebola outbreak cost the world $2.8 billion. Liberia, Guinea, and Sierra Leone experienced shocks to investments, production, consumption, and commodity prices. Unemployment rose, school attendance dropped, and nutrition suffered. Unfortunately, the economic and social implications of Ebola in the northeastern DRC are projected to be similarly devastating. The power of this disruption needs to be recognized before an event occurs rather than during or after the response. Comprehensive preparedness plans that account for economic risks can be the first line of defense against significant disruption of lives and livelihoods.

Innovations, including new vaccines and therapeutics, are possible during outbreaks. The only way to test for a vaccine or therapeutic for a disease like Ebola is to conduct a clinical trial during an outbreak. Clinical trials for an Ebola vaccine, manufactured by Merck, began in Guinea during the 2014-16 West Africa Ebola outbreak and generated results that prompted the WHO to approve the pre-licensed vaccine for use in future outbreaks. Global partners came together and created an environment primed to conduct research early on, enabling more than 300,000 people in the DRC and neighboring countries to receive this vaccine, which is now licensed under the name ERVEBO. In addition to, and as part of, response efforts, a multi-drug randomized control trial studying Ebola treatments found two treatments that increased the chance of survival from Ebola.

Thanks to collaboration across sectors, including governments, regulatory agencies, private sector, non-governmental organizations, and on the ground responders, Ebola is now a preventable and treatable disease. Rapid processes and public-private partnerships must become the norm. Anything less stifles innovation and stalls the discovery of vaccines and treatments for infectious diseases.

It is hard to stop an outbreak. The resurgence of Ebola in DRC just days before the outbreak was to be declared over is a humbling reminder of how hard it is to stop an outbreak. And the number newly emerging infectious diseases is likely to increase due to climate change.

Policymaker attitudes toward outbreaks are often referred to as a cycle of panic and neglect but this should stop. Viruses that cause these events need to be considered long-term threats, not one-off incidents the world will forget about in a few months. Only when this perception shifts and universal best practices are adopted, can preparedness efforts begin to thrive.