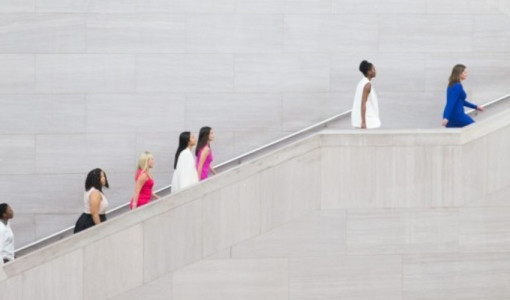 While International Women’s Day is supposed to be a global celebration of women’s social, economic, cultural, and political achievements, we don’t feel much like celebrating, if we’re being honest. We’re frustrated, to put it mildly, that a record breaking six women ran for president this year, but only one (Rep. Tulsi Gabbard) remains in the race – and with no viable path to becoming the nominee.

The fact that we will be forced, once again, to cast a vote for one of two white men feels personal, because it is personal. Some of us have experienced firsthand, the structural issues that thwart women candidates, as well as the blatant sexism women encounter on the campaign trail. And all of us have witnessed time and again smart, capable, ambitious women being overlooked, pushed aside, told to wait their turn, making it impossible to ignore the misogyny that plagues not just our political sphere but our entire lives.

However, we realized by remaining singularly fixated on the presidential race and our collective feelings of disappointment, we were ignoring the progress made to date and the opportunity to support thousands of women running for office at the state and local levels. So, we decided to persist and widen the pathway to the White House for women in the future.

So, here’s what we’re celebrating on IWD2020: Women’s interest in politics is surging! Women are mobilizing at levels never seen before, engaging in new ways, and reshaping the political landscape.

The number of women attending rallies and protests are setting records. Young women have higher rates of political engagement than the previous generation and their male peers. A historic number of women are turning out to vote. Women of color are playing defining roles in the outcome of elections. And women’s contributions to political campaigns have skyrocketed.

Cumulatively, the above contributed to the percentage of women in Congress reaching an all-time high (for now). As did the fact that women stepped up to run for office in record numbers. And we think it’s worth noting that women challengers outperformed men.

Once in office, women elected officials make a significant difference. They are more likely to prioritize issues of importance to women, children and families. And not only do women (co)sponsor more bills, but they pass more bills. Plus, legislatures with more women are more productive.

The effect of women in office isn’t limited to policy. Seeing women in leadership positions, normalizes women’s representation and results in a “multiplier effect,” inspiring more women to run for political office. In other words, all those pinky promises Sen. Elizabeth Warren made with little girls will make a difference. The question is, in the coming years, what can we do to lay the groundwork for the next generation of women leaders?

We launched The Ascend Fund to accelerate the pace of change towards gender parity in U.S. politics, because we believe in the theme of IWD2020, “An equal world is an enabled world.” The fund pools philanthropic capital to support nonpartisan, nonprofit organizations that are breaking down the barriers that prevent women from running for office and working to ensure women have access to the resource and support they need to win.

Over the coming years, our grant partners will focus on increasing the number of women serving in state legislatures. Women currently hold 2,144 of the 7,383 state legislative seats (29%). To reach gender parity, we need to elect an additional 1,533 women. For the sake of simple math, if we were to split this number evenly between the 50 states, that’s only 31 women/state. Surely you know 30 women qualified to run for office, plus you!

Please consider this our invitation to you – a call to action to join the fight for women’s equality. In the coming years, we want to celebrate you on IWD! If you’re not ready to run for office yourself: