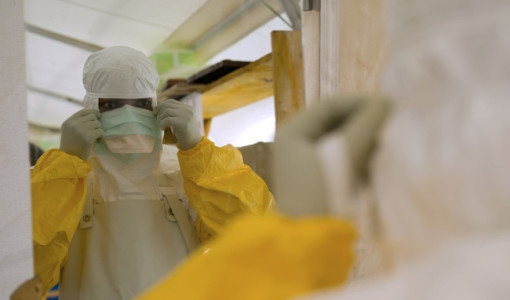 A worker prepares to leave the red zone at an Ebola treatment center in Guinea in 2014. Photo: Kenzo Tribouillard, AFP/Getty Images

When the Democratic Republic of Congo detected cases of Ebola in May, local officials moved swiftly and global resources were rushed to help them. By the time the World Health Organization declared the outbreak over on July 2, only four people had died, four more had survived the disease, and the outbreak had been contained in a remote region of the country.

Three years after the West Africa Ebola outbreak was first identified in March 2014, eventually killing more than 11,000 people and striking fear of global contagion, the world’s health leaders have taken steps to ensure they can mount a better response the next time such a threat arises.

But let’s not be fooled by a false sense of security. The world is still not as prepared to prevent or withstand the next disease outbreak as it should be. There is a dangerous rift between smart solutions and the political action needed to get them done.

After the West Africa Ebola outbreak was contained in 2015, multiple panels and commissions recommended reforms in the way that political, scientific, and health leaders approach global health security. As summarized in an article in the BMJ that I co-authored, these recommendations include access to health technologies, financing, accountability, and readiness by countries and by the United Nations systems.

A number of actions have been taken in response to those recommendations. A new Ebola vaccine was stockpiled by Gavi, the Vaccine Alliance. More vaccines will be developed to fight potential future epidemics, thanks to investments by the newly formed Coalition for Epidemic Preparedness Innovations. And the WHO, much maligned for reacting slowly to the West Africa outbreak, has reformed its structure by setting up the WHO Health Emergencies Programme to rapidly respond to any outbreak.

While these are significant achievements, other initiatives remain unfunded or on the back-burner. Many recommendations seem to have been ignored or forgotten.

We still don’t have a rapid, effective, easy-to-use diagnostic tool. To be sure, onsite labs can diagnose Ebola relatively swiftly. But in rural areas, such labs are few and far between, requiring that samples be transported long distances before a diagnosis is made. There still are no drugs to treat Ebola. Countries still hesitate to share their data and samples, fearful that rich countries will use them to make vaccines that don’t benefit citizens of poor countries. Progress has been slow in limiting the impact of trade and travel restrictions — when most international airlines stopped flying to Ebola-affected countries in 2014 and 2015, that prevented health workers from entering the country and significantly disrupted the economy by stopping trade. And we have not reached clarity on the lines of responsibility among UN agencies, important for ensuring a speedy response in the next crisis.

The outbreak in the Democratic Republic of Congo exposed our anemic progress. There was a stockpiled vaccine, but it hadn’t been licensed anywhere and there were no robust plans and protocols in place to use it. If WHO and its partners could have ensured the vaccine was pre-approved in risky countries and ready to be shipped to village clinics when needed, the country’s Ministry of Health would not have had to examine data and make a crucial decision in the middle of an outbreak.

Dozens of susceptible countries have worked with a global program to help them evaluate what they need to do to prevent disease outbreaks, but there is little funding available to help them build on the recommendations. G20 ministers of health continue to talk about pandemic preparedness as a priority, yet we’ve not seen commensurate funding put toward these initiatives. The Contingency Fund, set up to support WHO’s emergencies program, has received only one-third of its targeted $100 million. This is particularly worrisome given that budget proposals by the Trump administration reduce support for WHO and other UN agencies involved in this work.

We need to fund the steps that will strengthen global health security, and rigorously track and monitor progress made by the private sector, foundations, local governments, and the scientific community, as well as the UN system.

Fortunately, the outbreak in the DRC was contained. But unless we mend this rift between technical recommendations and political action, we risk paying a steep price the next time a deadly outbreak occurs.

Gabrielle Fitzgerald is the founder and CEO of Panorama, a Seattle-based action tank. She ran the largest philanthropic initiative to respond to Ebola during the 2014-15 outbreak, and was a member of the WHO director-general’s Advisory Group on the reform of WHO’s response to outbreaks and emergencies.