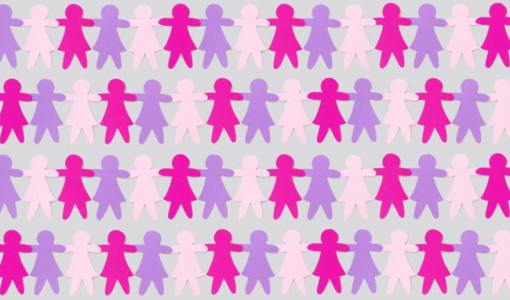 We are facing a pivotal moment in history where two major movements are aligned.

The #MeToo groundswell is changing the way we talk about taboo subjects that long seemed immune to honest discussion and genuine change. At the same time, women in philanthropy are achieving a rising level of wealth and influence.

It’s time for female donors to capitalize on this entry point and accelerate change, especially on issues that profoundly affect women and girls.

This moment is made even more powerful by broader trends. Women philanthropists and nonprofit leaders are keen to collaborate with business and government. This is increasingly important as we develop comprehensive solutions to social issues at home and abroad that require collaboration to achieve deep, systemic change.

In addition, collective funding approaches such as giving circles are on the rise, with women in the forefront. These efforts often are in line with greater activism by donors, encouraging them to engage directly in solving problems rather than just spend money.

Earlier this year in Davos, I co-hosted a gathering of 20 women philanthropists from all over the world with Ellen Agler, CEO of the END Fund, which fights tropical diseases, and Olivia Leland, CEO of Co-Impact, a new effort to spark collective giving focused on systems change. This was one of many energetic, impact-focused, women-driven events held outside the main World Economic Forum, where only 21 percent of the people with the coveted white badges were women.

These incredibly strong and thoughtful women believe passionately in building partnerships to take on issues relevant to women and girls, and they recognize that the best way to effect systemwide change is to do it in collaboration.

Olfat Al-Mutlaq Juffali, a Saudi philanthropist, founded the Shefa Fund with her husband, Khaled Juffali, to take on health issues in her home country and globally. At the Davos gathering, she said her peers are energized by the results of their philanthropy, and by the greater impact that collaboration has yielded. Julie Essiam, chief executive of the Togo-based Ecobank Foundation, praised the “diversity of thought, yet like-mindedness of dedication, passion, and commitment to solving global issues” that emerged at the meeting.

“I left inspired with a renewed energy of determination to step up,” she said, “and step up even bolder than I have ever before!”

I want to build on this energy. So, I encourage all women philanthropists to invest your resources, your intellect, and your time, and to work together to take advantage of this unique moment in history. Here are three ways how:

The U.S. midterm elections are under way. More women than ever before are running for office, impelled by the outcome of the last election, rampant Trump administration moves that harm women, and the energizing momentum of the women’s marches. Giving these candidates the means to run powerful, effective campaigns will directly lead to policy making that respects the rights of women and protects the most vulnerable in society.

Beyond the midterms, we need to ensure that the grass-roots energy generated over the past year becomes a long-term political force, by building organizational infrastructure to support women’s political leadership.

And, even as we approach the 100th anniversary of women’s suffrage in America, we still need to build an expanded base of women voters who demand results. This means working at the community level to harness the political power of women who haven’t traditionally gone to the polls.

Invest in solving an intractable problem.

If an ingrained culture of sexual harassment can be tackled head on, so can any number of other workplace issues that disproportionately affect women. Closing the pay gap, raising the minimum wage, and offering pay transparency would create economic security for women. So would offering paid family leave; the United States is the only developed country that does not do so, forcing people, mostly women, to choose between their job and caring for a loved one.

Other changes — predictive scheduling; portable benefits; affordable, accessible, high-quality child care — would allow women to remain in the work force at higher rates. Addressing these complex issues will not only create more equitable work opportunities for women; it will build a stronger economy.

At a global level, investing in low-cost treatments for neglected tropical diseases can help hundreds of millions of children avoid stunting and stay in school. Tackling these disfiguring, disabling diseases is both cheap and catalytic: Not only will children thrive; their mothers — who, as primary caregivers, are disproportionately affected — will be able to play a more productive role in improving the health and prosperity of their communities.

Invest in something new.

There are many issues affecting women and girls that are inexplicably off the philanthropic radar screen. They have been neglected for far too long. A handful of generous, targeted investments could make a big impact.

Take cervical cancer. Though completely preventable and treatable, cervical cancer kills more women in developing countries than die from childbirth. New tools, including the HPV vaccine and DNA tests to spot the disease, provide cost-effective ways to save women’s lives.

Menstrual-hygiene management is another area for impact. Cultural taboos and lack of sanitary supplies can keep girls around the world from attending school while they are menstruating. This complex issue falls within the remits of donors interested in health, sanitation, or education. Active, well-placed investments could rally the right people and organizations into a coalition capable of effecting real change.

How about child marriage? Worldwide, almost 750 million women and girls alive today were married before their 18th birthday. Or violence against women: The World Bank says it will affect one in three women in their lifetime. There is no shortage of important issues in need of philanthropic attention.

We must make the most of this confluence of global conversations about #MeToo and global energy motivating women’s philanthropy. Be bold, collaborate, and exploit this opportunity to make lasting change for women and girls everywhere.

Originally published in The Chronicle of Philanthropy, March 8, 2018.