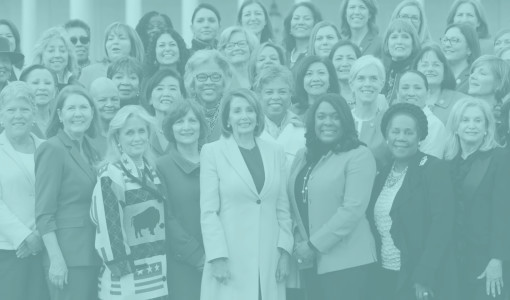 At The Ascend Fund, we believe that parity is possible in our lifetime because transformational organizations are building a pathway to public office for women. These organizations empowered women to make historic strides toward parity in the 2018 and 2020 elections, when women's representation in Congress increased from 21% to 27% and representation in state legislatures increased from 25% to 31%. They are poised to expand on that progress and make 2022 the best year yet for women's representation, propelling women to record numbers for the third election cycle in a row. Learn more about the work these 12 organizations are doing to support women running for office in 2022 and beyond.

There are just 10 AAPI women currently serving in Congress. APAICS is dedicated to promoting Asian Pacific American participation and representation at all levels of the political process, from community service to elected office. APAICS' Women's Collective inspires AAPI women to envision themselves as leaders and seek elected office. The Women's Summit & Leadership Academy typically take place in August, but check out their website for programming throughout the year - including monthly office hours and virtual events.

There are currently no Black women serving in the U.S. Senate. Higher Heights Leadership Fund is investing in a long-term strategy to expand and support Black women's leadership pipeline at all levels and strengthen their civic participation beyond just Election Day. Higher Heights' Senior Civic Leadership Fellowship program invests in the leadership of 30 Black women each year and inspires them to challenge themselves and further their leadership journey. We look forward to seeing these fellows run for office in the coming years.

The average age of a U.S. Senator is 63 and U.S. representative is 59. IGNITE is a national movement of women who are ready and eager to become the next generation of political leaders. By training young women and girls from kindergarten through college to see themselves as political leaders, IGNITE is changing the narrative and encouraging girls to declare their political ambition. IGNITE's Run Now programming challenges young women to run for office within the next three years. Run Now won the Lever for Change -- Equality Can't Wait challenge in 2021 and visit their website to learn more about Run Now 2022.

The first Latina senator, Catherine Cortez Masto, was not elected until 2016. LatinasRepresent is an initiative to increase Latina participation throughout the civic engagement continuum, inspire more Latinas to seek public service opportunities, and create a more reflective democracy. Through research, awareness campaigns, and virtual programming, LatinasRepresent is empowering Latinas to run for office and seek political appointments.

Despite making up an estimated 5.6% of the population, just 0.19% of elected leaders in the United States openly identify as LGBTQ. Victory Institute works to increase the number of LGBTQ people in public office and to provide programming, services, and other support to help ensure their success. Victory Institute's Women Out to Win mentorship program provides LGBTQ women with mentorship and supportive programming so they are prepared to tackle the challenges they face when running head on.

New Americans make up 26% of the U.S. population and merely 3.5% of state legislators. New American Leaders (NAL) empowers first- and second-generation Americans to run, win, and lead. In 2020, 65% of NAL alumni won their elections and NAL is poised to build upon that success in 2022. Ready to Lead, NAL's signature training program designed by and for New Americans, is a fast-track lesson in building a successful campaign. More than 68% of Ready to Lead alums are women and NAL offers Ready to Lead sessions exclusively for women each year.

As they grow up, girls are less likely to see themselves as political leaders than boys, with 75% of 12-year-old girls viewing political leadership as masculine. Running Start gives young women and girls the confidence, capabilities, and connections they need to run for public office. Running Start offers ongoing mentorship to their 12,500+ alums, continuously providing them with the confidence and networks to run for office successfully. Learn more about their high school, college, and mentorship programs on their website and ask a young woman or girl in your life to apply for a training.

Until 2018, candidates running for Congress were not able to spend campaign funds on childcare while campaigning. The Vote Mama Foundation enables mothers to find their political voice, making it easier for them to run and win. Since launching in 2019, Vote Mama has helped change the laws and rulings in 25 states to allow candidates running for state and local office to use their campaign funds to pay for childcare, alleviating a major financial barrier to running for office.

Only one state legislature, Nevada, has achieved gender parity in both chambers. Vote Run Lead trains barrier-breaking women to unleash their political power, run for office, and transform American democracy. Last year, Vote Run Lead launched Run/51, a transformational program committed to achieving gender parity in the Georgia, Minnesota, and New York state legislatures by 2024. Sign up to run in one of these three states or nominate a woman to receive a comprehensive 10-week plan to run and win in 2022 or 2024.

There are currently twice as many Democratic women than Republican women currently serving in elected office, and right of center women face unique challenges when running for office. Women's Public Leadership Network provides center- and right-leaning women with the knowledge and resources to make seeking public office and engaging in the political process more accessible. Through free virtual trainings, establishing state-based partner organizations, and supporting grassroots organizations, Women's Public Leadership Network is building a pipeline of women ready to run and win in 2022.

Currently, women hold a record number of congressional, state legislative, and gubernatorial offices with 144 congressional seats, 2,299 state legislative seats, and nine governorships. But it's important to remember that these records are a far cry from parity. We believe that the organizations listed here -- and so many others in this space -- are going to make 2022 the best year yet for women's representation and won't stop working until parity and a truly representative democracy is realized. We encourage you to learn more about them, support their work, and support women running for office.

Progress toward parity will only be possible when we all work together.