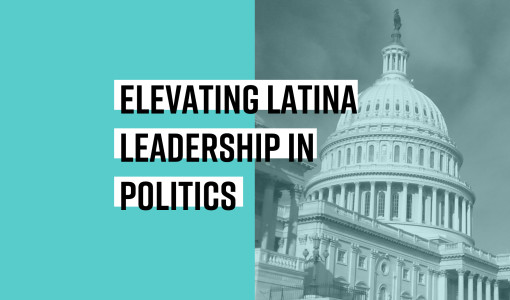 This post originally appeared on The Ascend Fund, Panorama Global's collaborative fund dedicated to accelerating the pace of change toward gender parity in U.S. politics.


Latinas are deeply underrepresented at every level of elected office. Latina leadership, however, is transformational, when elected, Latinas are powerful changemakers, fighting for their communities. This Hispanic Heritage Month, support and encourage Latinas in the political sphere -- whether they are running for office, currently in office, or working in politics -- and the organizations that are working to empower Latinas to run for office, including Ascend partners LatinasRepresent and New American Leaders.

Latinas make up 9.06% of the U.S. population, but just 1.81% of state legislators, 2.42% of the U.S. Congress, and 2.26% of statewide elected officials. Not only are Latinas deeply underrepresented, but what progress has been made has only been very recent. The first Latina elected to the U.S. House of Representatives, Ileana Ros-Lehtinen, was not elected until 1989 and the first Latina U.S. Senator, Catherine Cortez Masto, was not elected until 2016.

While women as a whole are not proportionately represented in U.S. politics, Latinas are the most severely underrepresented. Latina representation in state legislatures is just a fifth of Latina's share of the U.S. population. All women face severe barriers when running for office -- sexism, fundraising, exclusionary political parties -- but non-white candidates face harsh barriers compounded by systemic racism.

In recent years, women running for Congress have outraised men on average, but increased dollars have resulted in gains primarily for white women. In 2018, the average fundraising for a white woman major party Congressional nominee was $2,017,768, compared to just $1,363,349 for a Hispanic woman major party Congressional nominee. Additionally, while white women outraised white men on average, Hispanic men outraised Hispanic women. Given that the candidate who spends the most wins in more than 90% of congressional races, leveling the playing field is crucial to achieving a truly representative democracy.

Latinas raise less money because they have been excluded from the traditional donor circles that have propelled so many white and male candidates to success. They then must work harder and longer to fundraise through untraditional methods. To learn more about the funding disparities that women of color face, read our previous column, The Cost of Success.

Racist, sexist attacks and threats of violence against women of color running for or in elected office are far too common. Attacks on high profile Latina elected officials, such as Congressman Ted Yoho's verbal assault of Congresswoman Alexandria Ocasio-Cortez outside the U.S. Capitol last July, highlight the pervasive racism and sexism that dominate U.S. politics and deters other Latinas from deciding to seek elected office themselves.

Systemic racism also excludes Latinas from powerful political infrastructure, such as local political parties and high net worth donors, a barrier that is compounded by the economic structures holding Latinas back. Latinas face a tremendous wealth gap, earning just 54 cents on the dollar for what white men earn, making it even more challenging for them to take a year off of work to run for office. Additionally, the average pay for a state legislator is just $38,370, making the office inaccessible for people without significant wealth.

When Latinas do not see themselves represented in politics, it sends the message that political leadership isn't meant for them. Role models serve a crucial role in paving the way for women to envision themselves as political leaders and ultimately make the decision to run for office. Given that so few Latinas are currently serving in elected office, there is a dearth of role models to set the example.

*"When a young person, even a gifted one, grows up without proximate living examples of what she may aspire to become--- whether lawyer, scientist, artist, or leader in any realm--- her goal remains abstract. Such models as appear in books or on the news, however inspiring or revered, are ultimately too remote to be real, let alone influential. But a role model in the flesh provides more than an inspiration; his or her very existence is confirmation of possibilities one may have every reason to doubt, saying, "Yes, someone like me can do this."

Equal representation isn't just what's right; it's also what's good for democracy. When elected, Latinas are changemakers, ushering in transformational policy change and establishing a pathway for the women behind them.

Latinas fight for their communities and for impactful policy change. While the voting rights of Black and Brown people have been under attack across the United States, Virginia Delegate and current Democratic Nominee for Lieutenant Governor Hala Ayala has been a leader in expanding voting rights across the state. Delegate Ayala grew up in poverty and worked minimum wage jobs while attending college online and raising her son, graduating in 2013 and becoming a cybersecurity expert. She has been involved in politics through statewide advocacy for women and was inspired to run for office following the 2017 Women's March. She has introduced legislation and passed legislation to allow same day voter registration.

Speaking about her groundbreaking leadership and role in the fight to ensure voting access to her community, Delegate Ayala said:

*"This political system certainly wasn't built for someone like me, an Afro Latina single mother of two who worked her way from a minimum wage job at a gas station to a career in cybersecurity and a leadership position in the House of Delegates. However, thanks to the tireless civil rights activists and heroes who came before me, I stand here today ready to carry their torch and continue blazing a trail for the future."

Building the Pathway to Public Office

While there are myriad challenges facing Latinas running for office, the good news is that groundbreaking organizations are doing their part to build a pathway to public office for Latinas.

New American Leaders, an anchor partner of The Ascend Fund, is the only national, nonpartisan organization focused on bringing New Americans, including Latinas, into the political process. They provide state of the art trainings for elected officials, prospective candidates, campaign staff, and women beginning their journey into the political sphere with the goal of building an inclusive democracy in which everyone can participate.

The Latina State Legislative Initiative works to foster the next generation of Latina legislative leaders. Through mentorship, leadership training, and professional development, they are working to build a pipeline of networks to increase Latina representation in state legislatures.

Hispanic Heritage Month provides an opportunity to highlight the contributions of Hispanic women and Latinas, but we must commit to elevating Latina leadership all year. We are proud to support LatinasRepresent's and New American Leaders' work to build a pathway to public office for Latinas and build a truly reflective democracy. We encourage you to support Latina candidates and support the work of LatinasRepresent and New American Leader's by donating, volunteering, and amplifying their transformational work.